This group of YouTubers burst in Mexico’s political and media scene after the 2018 elections, when Andrés Manuel López Obrador, also known as AMLO, was elected President. They call themselves “De la 4T” (Of the 4-T), in reference to “Mexico’s Fourth Transformation,” which AMLO promised to lead, and fiercely defend his government. They’ve become sources of information for millions of people who follow them on social media, especially YouTube, were many of them have more than 1 million followers.

The YouTuber’s affinity with AMLO’S government is evident on their social media accounts. This is the case of Ed, from Campechaneando, who defines himself on his Twitter profile as a “YouTuber Pro-Amlo”. Or Nacho Rodríguez, El Chapucero, who appears in his videos wearing shirts with AMLO on them or phrases that made him famous, like “Me canso, ganso” (I’m dog tired), which he also sells. Some YouTubers now wish to compete in elections with Morena, the party with which AMLO won the Presidency.

During the COVID-19 pandemic, however, they’ve turned into spreaders of disinformation. A report made by Verificado about the content of the videos uploaded to YouTube during the first year of the pandemic (January 2020 – February 2021) showed that tens of videos include false or misleading content.

Underestimating cases and false cures, some of the most common disinformation

These YouTubers are not the only disinformants in Mexico, but they represent a group with a specific agenda close to the most influential public character in the country, the President. Within these groups, 40 YouTubers were identified, and the analysis focused on the 20 with the highest number of followers. Of all the videos, 107 were chosen, since they included keywords like “coronavirus,” “pandemic” or “COVID.” Most disinformation referred to the spread of the SARS-CoV-2 virus (19), and usually underestimated the number of cases, but some content also included disinformation on vaccines (13), and assured that some vaccines had already been approved when they were still being developed; other videos are about alleged cures against COVID-19 (10).

Analyzed by their protagonists, the channels El Charro Político (15), El Chapucero (7) and Benditas Redes Sociales (6) had the highest amount of disinformative claims.

On March 14th, 2020, shortly after the government launched the “Sana Distancia” program, Mexico’s healthy distance strategy against COVID-19, a video with unsupported conspiracy theories was uploaded in Benditas Redes Sociales. The video suggested that American soldiers caused the pandemic. Another case was the video published on April 29th, 2020, by Ignacio Rodríguez, El Chapucero. Rodríguez claimed that Mexican private hospitals were exaggerating the number of COVID-19 deaths to discredit the work done by AMLO’s administration. He used interviews with alleged family members of people that had contracted the virus. However, the Mexican Government never debunked the figures provided by private hospitals.

Juncal Solano, the YouTuber that hosts El Charro Político, spread disinformation on a new vaccine that had been discovered on August 18th, 2020. Solano assured that Mexican scientist Mónica Olvera had discovered something “more efficient than the Russian vaccine” and that the President would be the first person to get it. This, however, was false. When the video was published, the work was in progress, and it wasn’t a vaccine, but a new method to block coronavirus after it entered the human body. All these YouTubers combined (all 40 of them) have more than 18.6 million followers, according to their number of subscribers by May 2021. Those who have more followers are:

During an interview, Ignacio Rodríguez, who has more than 1 million followers, vaguely explained how his YouTube Channel, El Chapucero, works.

“Nacho” Rodríguez’s YouTube channel started to promote videos through El Chapucero in 2017, before Mexico’s state election. Later, it got even more popular in 2018, when AMLO became President.

Rodríguez claims that he talks about coronavirus in his channel because it’s the most important news worldwide, and he admitted to disinform, even though he believes it’s justified due to the ever-changing situation. “In the end, we’ve all made mistakes when it comes to coronavirus,” he said.

He recognized that the content he shares is not made of scientific claims, but opinions about issues on the media agenda. Rodríguez clarifies that one of the main ways to create content is to collect information from social media, international and national media outlets and RT – the Russian news agency that has spread disinformation about several topics in the past.

When asking Rodríguez about a false claim that Verificado found in one of his videos of March 2020, which stated that plaquenil was an effective treatment, the YouTuber claimed that it was a mistake, he was only expressing his opinion and no one knew the impact that coronavirus would have at the time. However, the video is still available on his channel, without any clarifications. On different occasions, he also disinformed about issues that already had scientific support, like the time he said, in March 2020, that SARS-CoV-2 wasn’t a deadly virus. “If we start looking at the things Verificado said in March, I’m sure that I will also find fake news. I’m sure about it, I’ll bet on it right now,” he said, without providing any evidence, during the interview, or after it.

When asked about the similarities between the video channels of YouTubers pro-AMLO, Rodríguez said that they are not organized amongst themselves with regards to content creation. However, he disclosed that there is a WhatsApp group chat where YouTube content creators communicate with each other and alert each other about changes in the platform’s policies, errors on sites or other technical problems.

Some of the similarities found in most of the content generated by Mexican YouTubers “De la 4T” are: sensationalist titles, images with striking fonts and colors on the cover of their videos, informal language, and content with information sources from other websites.

This was the case of El Chapucero. In August 2020, his Facebook account was suspended for spreading disinformation. On another occasion, El Chapucero assured that hydroxychloroquine was the cure against coronavirus. National media outlet Milenio TV verified it and the video was removed. However, the YouTuber insisted on Twitter that plaquenil – hydroxychloroquine – did cure COVID-19 patients, while its use had only been approved by the FDA for experimental purposes, and not as a proven cure.

For the YouTubers “De la 4T”, the platform’s actions represent censorship, according to Nacho Rodríguez, and they often create new profiles on the platform to continue spreading their content.

Other strategies to escape the platforms’ control systems are: combining numbers and letters on the titles (C0V1D), avoiding certain words that they know the platforms are monitoring, or talking about “covi.”

When asked about this, a spoke-person from Google, the company that owns YouTube, confirmed that they had invested a lot of resources to comply with the responsibility of protecting the community of suspicious content, focusing on the following: removing content that violates their policies; strengthening the increase of reliable content; and reducing the spread of suspicious content.

They recognized that the method to detect this content is based on reports submitted by users, which can be done on the same platform. “We know that there’s still work to do, so we’ll continue to invest in this area, but we ask our users to report in the platform content that they believe is harmful,” he said.

Additionally, they confirmed to have removed thousands of videos related to false or dangerous information about the coronavirus, and they continue to remove videos that, instead of recommending medical treatments, promote methods that are medically unapproved by health authorities and that allegedly cure the disease.

However, the identified videos of YouTubers “De la 4T” are still available on the platform. Google’s representative clarified that it’s an ongoing and titanic process, which is the reason why they’re estimating to invest more in technological resources, to detect this type of content more quickly.

Revenue and strategies to get resources for their videos

With millions of followers, pro-AMLO YouTubers claim that they do not receive money from the President, but they do have other ways to fund their content. Some of them profit from YouTube; others, through PayPal links, donations, merchandising or advertising.

Channels like Sin Censura Media, El Chapucero and Mafian TV include links that direct users to PayPal donations. Other channels, like Benditas Redes Sociales, present bank accounts to make transfers to Mexican convenience stores. When this investigation was being carried out, in January and February 2021, some of those links disappeared from the YouTube channels.

El Charro Político and Nopal Times are part of the marketing agency Brolan, of which Saul Soltero, the main YouTuber of Nopal Times, is the co-founder. He also helps with the production of other channels, like Defensor de la Verdad. (Defender of Truth). All those channels have merchandising for sale, including mugs with the image of their YouTube channels.

In April 2019, some Mexican YouTubers were invited to promote Tianguis Turístico México, an event for companies dedicated to the hotel industry and similar services, in which Mexico promotes different tourist destinations. 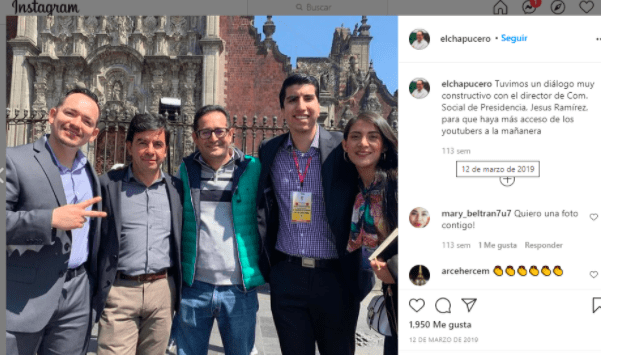 Regarding the monetization of content in YouTube, a Google spokesperson said that, due to the platform’s policies, the information they provide is not specific to any channel in particular. However, this decision is made by each creator, so it’s hard to learn the amount of revenue.

The language of these communicators encourages confrontation between traditional media and the President in a “virtual ring,” where AMLO “humiliates,” “leaves them with their mouth open” and “confronts” his “detractors” in his regular morning press conferences, stated Cristina Matariz, researcher and professor at the school of journalism Escuela Nacional de Periodismo Carlos Septien, and member of the National System of Researchers, in this article of La Silla Rota.

This confrontation is used by the group “De la 4T“ to endorse their closeness to the President and the audience, and it may be one of the reasons for their success.

After acting as spreaders of disinformation on COVID-19 and other issues in Mexico, some YouTubers pro-AMLO declared on Facebook on March 11th that they wished to be elected with the Morena party, which is the party with which AMLO was elected President.

They announced their candidacy themselves in videos promoted on their social media under the slogan “YouTubers to the Congress,” which was amplified by Mexican media outlets of national circulation, like El Universal and Publímetro.

Note: Even though we requested an interview with the team of El Charro Político and sent emails to get in touch with more YouTubers, we didn’t receive any replies.

This research is part of “The Disinformants,” a series of investigations about different actors who have disinformed during the pandemic conducted by LatamChequea, the Latin American fact-checkers network coordinated by Chequeado that includes editions from participating organizations and journalist Hugo Alconada Mon. 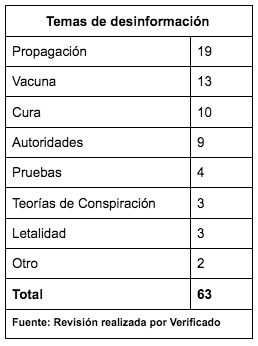 Methodology:
For this investigation, Verificado identified, between January and March 2021, 40 YouTubers who publicly supported President Andrés Manuel López Obrador (AMLO) and his “Fourth Transformation” (a period of time acknowledged by the President as historical, after the War of Independence, the Reform War and the Mexican Revolution).

Out of the 40 YouTubers allied to the “4T,” we chose, in January and February 2021, the 50% with the highest number of subscribers, which were between 2.39 million to 266 thousand, to find disinformation related to COVID-19. When analyzing the 20 pro-AMLO YouTubers with the highest number of subscribers, we conducted 107 reviews, where we searched for keywords like “coronavirus,” “pandemic” or “COVID.”